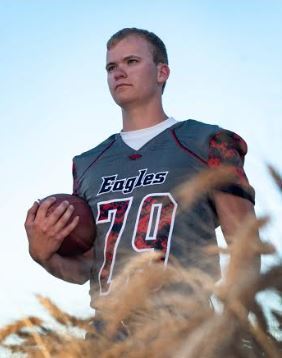 CCHS Oct. Student of the Month

Eric is the son of Greg and Karrie Peterson. Eric has been a part of the football team for the last 4 years, lettering for 1 year and being a captain this year. He also has played basketball for 3 years, lettering for 2. Eric has also been very active in FFA, being a chapter officer for the last 4 years, and is the president this year. He is also the North Central District secretary. In addition he has been active in FBLA, StuCo, scholars bowl, FCA, power lifting, 4-H, and his church youth group. His future plans include running for a state FFA office, and attending Kansas State University, and then eventually becoming a wild land firefighter.